Sakura is a white-skinned girl with blond hair that is tied up in two pigtails and bright blue eyes.

In Da Capo, she is usually seen wearing her school uniform. In Da Capo II she is seen wearing a long sleeved black shirt with a white short sleeved shirt over it and a skirt. She is a very small sized girl, despite her age in Da Capo and Da Capo II.

Sakura is the student of Kazami affiliated junior high class 3-3. She is Jun'ichi's elder cousin and first love. She is a very lively girl who, much to Nemu's dismay, shows great affection towards Jun'ichi. She is sometimes seen with Utamaru and understands what it says. While older than Jun'ichi, she addresses him as onii-chan (お兄ちゃん, meaning "older-brother"), hoping that Jun'ichi would act like an elder brother and protect her. While sporting a great love for Japanese culture, she appears to be more of the mistaken foreigner. She has an IQ of 180, but she's inept with kanji due to growing up in America. She inherited her grandmother's magical ability. Despite the passing of several years, her appearance remains unchanged from what Jun'ichi and Nemu remember when she first left for America, which was explained to be so that she will always be as Jun'ichi remembers. She is one of the two returning characters in Da Capo II. In Da Capo: If, she plays a great role in saving both Nemu Asakura and Jun'ichi Asakura from their demise. Sakura made three promises with Jun'ichi when was a little girl. The first one was to reunite again,  the second one was to help each other when in trouble, and the third one was when was when they meet again they'll be lovers. When she was making the promise,  Sakura knew Nemu was behind the trees but told him the promises anyway. Jun'ichi was unable to fulfill the last promise because he fell in love with Nemu. 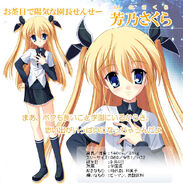