Kotori Shirakawa (白河 ことり, Shirakawa Kotori) is the student affiliated with Kazami's class 3-3 and the school idol. The Magic Tree granted her the power to read minds.

She falls in love with Junichi after he helps her with the emotional distress after she loses the ability to read minds. In Da Capo If, she and Junichi Asakura gets married (which now makes her Kotori Asakura).

A school idol of all positive traits, kind to everyone, sings well, excellent grades, all the while being beautiful/ She is popular with the Kazami Academy student body, even a informal fan club was formed. She looks inaccessible, and when she talks to her, she is actually a refreshing girl who is friendly with her first-time partner. Her charm point, her hat , belongs to the choir at the recommendation of her parents , and her hobby is collecting her hats. Her favorite things are sweets in general, cherry blossoms and orange juice. She is not good at crowds, dogs and spicy foods in general. She is a family of four, and Junichi's class 3rd grade class teacher Shirakawa is her sister-in-law. Like Shirakawa in " DCII ~ Da Capo II ~ ", he has the ability to read people's hearts ( telepathy ) by the magic of the undying cherry tree, and although he is attentive to the surroundings, he thinks this act is cowardly and dirty. I am suffering from what seems to be the ideal idol from the people around me. This ability plays an important role in her Kotori route. She can study and is good at cooking, but she seems to be a little weak at exercising.

Sayaka Shirakawa, the heroine of the adult game "Suika" produced by the company, is a cousin and also has a hobby of collecting hats.

In the Megami Magazine special project ranking at the beginning of the anime, it was lower than Asakura Nemu , but it became more popular during the anime broadcast and later gained the highest popularity among DC characters in the same ranking. At the time of the magazine's 10th anniversary project, it was recognized as one of the five major heroines of all time, including other works. In addition, in the "Popular heroine rankings chosen by readers" conducted by Dengeki G's magazine, it continued to maintain the top position for a long time until the March 2005 issue, and even when more than 7 years have passed since the release of the PC version, DCII ~ Da Capo II It continues to be ranked in the top 5 with Asakura Otohime, and is the most popular character that has been ranked in the longest of all the characters ranked in the magazine. However, in recent years (2010), she has been pushed by other new heroines and occasionally falls below the top five.

DC-related fan discs and goods after DCFS are often used to decorate package pictures instead of the main heroine Nemu. In addition, two DVD-BOXes from the TV anime series ("DC-Da Capo-DVD-BOX (first production limited edition)" released on December 25, 2008 and released on March 25, 2009. In "DCSS ~ Da Capo Second Season ~ DVD-BOX (First Production Limited Edition)"), the OVA " DCif Da Capoif ~ " featuring her was recorded as a privilege in the first and second parts.

As mentioned above, the cherry tree has the power to read the mind, but basically no one knows it. In the anime drama CD "Hatsunejima Drama Theater", except for Kotori, Junichi is drawn to know that, and Kotori uses honorifics for Junichi at the beginning as if to show it. As the story progresses, honorifics and tame words are mixed, and the tone becomes "○○ ssu".

Kotori, who is both talented and talented, was a person who was seen by the surroundings, but Kotori himself felt a complex to be seen as an idol of the school. However, she likes her main character, Junichi Asakura, who treats her indiscriminately unlike her surroundings. She also has her singing voice so good that she can enter the contest, and she is even soloed in the choir.

It seems that he had acquainted with Junichi and Sakura's grandmother when he was young, and is described by Junichi's "dream".

" DC White Season " depicting Christmas of the same year as DC , " DC Summer Vacation " depicting the summer of the following year , " DC Four Seasons " In " Four Seasons " and "DC After Seasons-Da Capo-After Seasons", he went on to our school. She can capture as a heroine in the amusement park edition of DCSV and the spring edition of DCFS / DCAS which is a remake of it.

At DCWS, they were still love-loving, but for some reason they quarreled. A girl named Hina appears there, and they are called "daddy" and "mama".

The future is hinted at if she is chosen in the DC world. Not ported to DCFS / DCAS.

The DC edition of " CD Christmas Days ", a compilation fan disc of multiple circus works, depicts the events of Christmas one year after the White Season Kotori edition. Second grader of our school.

Kotori decided to confess to Junichi using the beauty pageant of the graduation party, but at the very moment when she tried to confess, Junichi's younger sister Nemu collapsed and the confession failed.

The truth is why Kotori was taken over by the calendar house, why he needed the ability to read people's hearts, what his real parents were doing, and why he knew the secret of Kudo Kano. It becomes clear.

In the epilogue, Hina Asakura, who appeared in DCWS, appears as two children..

In " Kotori Love Ex P ", the scene of the newlyweds after that is drawn. After graduating from Kazami Gakuen, she worked as a nursery teacher at the nursery school where her niece Chiaki Saeki attends, and after Junichi graduated from college, she got married, but at the nursery school she gave her maiden name. Depending on her route, her husband Junichi would have an affair, but she didn't notice until the end.

Kotori herself does not appear in the sequel " DCII ~ Da Capo II ~ " , which depicts 53 years after DC . One of her heroines has a character named "Naka ​​Shirakawa," but she is not a direct line of Kotori, as explained in the official visual book.

In "DC ~ Christmas Mirai Koi Yume ~", although it is a parallel world, it is not a little shocking to know that Junichi and Nemu were married in the future world 53 years later.

In "DCII ~ Day Dream Believer ~", Yoshiyuki and others who came from the future are the first to be accepted and supported. She is also one of the few people who noticed a sense of discomfort in the loop world, and she will consult with Yoshiyuki and others in the future. When she shook hands with Shirakawa, both sides had a mysterious experience like telepathic communication. Actually, on the actual time axis (the world of "DC"), I didn't know Junichi and Nemu yet on December 22nd before the Kripa event, but I already knew them in this world (in the route of Naka & Kyou). There is a contradiction that Nemu and the first name are called), which is greatly involved in the story.

Compared to the game, she has a friendly and friendly personality, but there are many scenes that she is worried about, and she has a slightly serious and mature personality.

By the end of the sixth episode when Nemu of " DCSS ~ Da Capo Second Season ~ " appeared, all episodes appeared as the main characters in the absence of both Nemu and Sakura.

At the same time, many fans sympathize with the humble attitude of retiring from his position, hoping for the happiness of Junichi and Nemu . On the other hand, she confessed to her previous work, Junichi, and seemed satisfied with being shaken, but while taking care of her instead of Nemu, her feelings swelled again, and it became a trigger for the revival of the cherry tree later.

In this work, it is the main heroine. The relationship with Junichi has developed to the point of being in love, but not in love. Junichi thinks he can't move forward because of the existence of Nemu who has disappeared, and tries to clean up Nemu's room with everyone. However, when she notices her feelings in Nemu, she refuses Junichi who cuts off Nemu and tries to tell her feelings to herself. 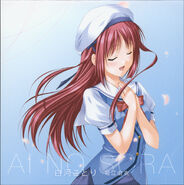 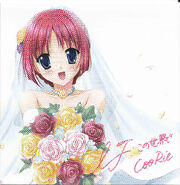